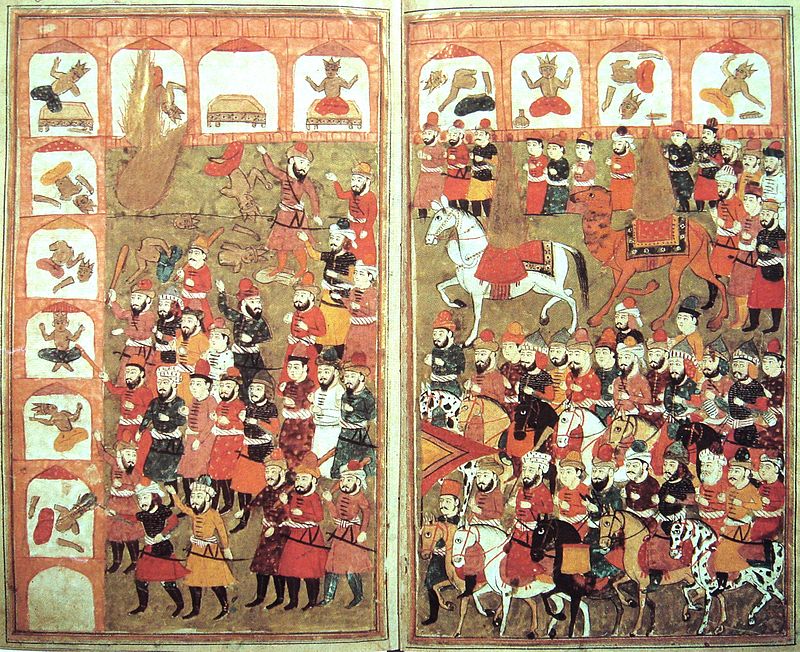 The Hegira was a fresh start for the Muslim community in Medina. The members of this new movement left the city of Mecca behind, but the migration meant they would need to start all over again. Their wealth and affluence were gone (for the rich ones, at least), but they were now stripped of their dependence on their clan or their tribe’s protection. With freedom, however, came new realities and they needed to use their wits with them if they were to survive in the new city of Medina. (The Mohammedan Chronology began in 622 AD as listed on the Biblical Timeline Chart with World History.)

Mohammed and his followers spent the first two years in the new city in poverty. The few acres of farmland the oasis provided were not enough to support the original inhabitants of Medina which made it harder for the newcomers to earn a living. It was not until 623 AD when Mohammed and the Muslims carried out a series of Caravan Raids against Mecca. Partly as revenge for the persecution they suffered at the hands of the leaders of the city and as a way to support themselves. These Caravan Raids, as dictated by the codes of the tribes, were for materials possessions only and strictly forbade bloodshed.

624 AD was a crucial year for the community as this marked the Nakhla Raid when large amounts of booty were taken by the Muslims from unsuspecting Meccans. This raid was not approved by Mohammed as it happened during the pilgrimage month, a time when hostilities were temporarily forbidden. A Meccan was also killed during the raid, an act that further enraged the leaders of the Quraysh tribe. The tribal leaders sent a large army as revenge, and though they were outnumbered by the Quraysh, Mohammed’s followers defeated the forces of Mecca in the Battle of Badr in the same year. This was also the year when members of the Jewish Banu Qaynuqa were expelled from Medina after an alleged violation by the tribe.

The Quraysh of Mecca had not forgotten their humiliation at the hands of the Muslims. So they assembled a large force to punish the emigrants. They met in the Battle of Uhud where the Muslims were soundly defeated at the last moment, and the Meccans went home victorious. In addition, 625 AD was the year when the Jewish tribe Banu Nadir was expelled from Medina after the tribal leaders refused to contribute the blood money Mohammed asked from them. The blood money was payment after a man was killed during a quarrel with some people, which included Muslims. It was also alleged that the Banu Nadir challenged the leadership of Mohammed. Because of this, the members were besieged by Muslims for fourteen days. They were forced to leave Medina when it appeared that Mohammed and the Muslims would prevail. Some of the exiles went north of Medina to settle in Khaybar, while others continued to Syria.

In 627 AD, the Quraysh once again tried to get rid of the Muslims with the help of the ousted Banu Nadir and Banu Qaynuqa tribes. The Muslims in Medina were further outnumbered when other tribes joined the Quraysh-Banu Nadir-Banu Qaynuqa alliance. Mohammed decided to act quickly and enlisted the help of Salman the Persian who suggested that trenches be dug around Medina to prevent the Meccan alliance from reaching the city. The strategy was very effective, but the results were unclear as cold weather set in and the Medina alliance went home. But the greatest casualties of the Battle of the Trench (as it was called) were the men, women, and children of the Jewish Banu Qurayza tribe. It was the only significant Jewish tribe that remained in Medina after the first two were driven out and in the chaos of war, Mohammed accused them of betrayal during the Battle of the Trench. They were given two choices: convert to Islam or die and be enslaved. The Banu Qurayza chose the second, and as much as 700 men were killed because of this choice, while the tribe’s women and children were enslaved.

In 628 AD, Mohammed decided it was time to put an end to the hostilities with Mecca so he organized a pilgrimage to the Kaaba as a sign that the Muslims came in peace. He discouraged the pilgrims from bringing weapons. This was positively met by the leaders of the Quraysh. The Treaty of Hudaybiyya was affirmed by the leaders of Mecca and Medina, and peace between the two was achieved for the first time in many years. In 629 AD, the Muslims launched a final conquest against the Banu Nadir, who went into exile to the oasis of Khaybar. The Jewish tribe was defeated, and they were allowed to remain in Khaybar, but they were ruled by Muslims in the area from then on.

By 630 AD, tribal allies of the city of Mecca violated the peace Treaty of Hudaybiyya and attacked one of Mohammed’s allies which started the final conquest of the holy city. Mohammed mustered an army to attack the city, but Mecca was exhausted with the years of hostilities with the Muslims and chose instead to make another peace treaty. Mohammed entered the city without bloodshed, and he removed idols from the Kaaba as part of the agreement. Many Meccans also converted to Islam and in the same year, Mohammed became the ruler of a greater part of Arabia.

In 631 AD, the Arabs of Mecca, Medina, and neighboring cities were unified under Mohammed as a prophet, but he was never given the title of nor considered king. He was credited as the one who brought peace to its various tribes in the hostile peninsula and in the same year, most Arab tribes had converted to Islam. In October of the same year, Mohammed led the Muslims in an offensive against the Byzantines and successfully captured the city of Tabouk (the Byzantine rulers were not in the city itself).

Mohammed, aged 63 years old, made his Farewell Pilgrimage to Kaaba in 632 AD. He died after an illness on 8 June 632 AD and was buried in the house of his wife, Aisha.